The theorem may be short and seem simple, but there are many types of questions you could face in an exam.

You will use this theorem if you continue studying math at a higher level. It’s a useful equation to keep in your math tool kit!

Applying the theorem with confidence is helpful for many people in the world.

The Pythagorean theorem really does have lots of real-life uses. You may use it for crafts, in construction, for baking, gardening, or choosing a smartphone. Without it, GPS location wouldn’t be a thing!

Each worksheet has a different focus. You might have one particular area you’d like to improve on, or perhaps you’re looking for a complete crash course.

Either way, don’t forget to show your working out, and start at the right skill level – each Pythagorean theorem worksheet is given in order of difficulty!

Worksheets
The Man, the Legend: Pythagoras of Samos
Who ACTUALLY Wrote the Pythagorean Theorem?
What is the Theorem
Other Theories and Discoveries Attributed to Pythagoras
How Many Solutions?
Solutions When a = 2
Special Solutions: Triples
Properties of Triples
A Brief Example
Families of Triples
A Briefer Example
To Sum Up (Pun Intended!) 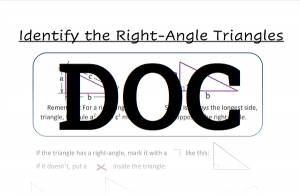 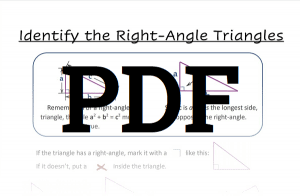 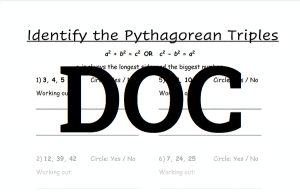 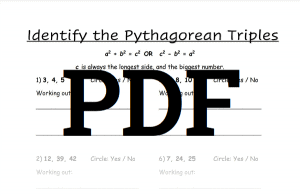 Level 3: Find the Missing Side Length of Right-Angle Triangles 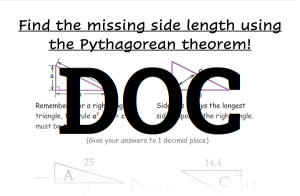 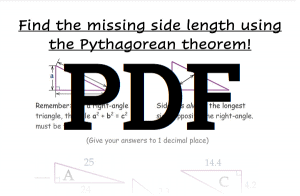 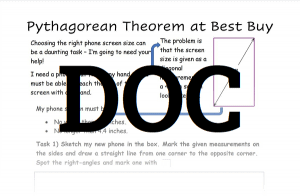 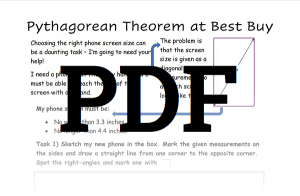 The Man, the Legend: Pythagoras of Samos 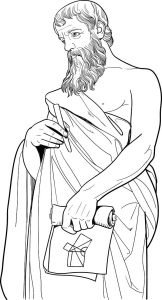 The Pythagorean theorem is named after the Greek mathematician and philosopher, Pythagoras, who was born around 570 BC.

His home was the small Greek island Samos which is in the Mediterranean Sea, near Turkey.

Although he grew up in a beautiful paradise, there was political conflict. He traveled to Egypt and Persia as a young man before settling in southern Italy.

In Crotone, Italy, he established a school of philosophy and science. His students were called his disciples, his school like a family – a brotherhood.

In fact, the group he established was called The Brotherhood of Pythagoreans.

The Brotherhood had a structured life of exercise and study. They believed that to live forever in their second life, they needed to be physically perfect.

Pythagoras and his disciples, as they were called, were incredibly disciplined. They wanted to keep their bodies “morally pure”.

He was, by most accounts, a wacky guy – he always put his right shoe on first, never ate beans, didn’t travel by public roads, and encouraged his students to be silent wherever possible!

None of his writings have survived. That isn’t too surprising, given that he lived almost 2600 years ago!

Pythagoras is a man of mystery. Without his records, everything we know about him comes from what his disciples and other scholars wrote about him.

Imagine trying to find out what someone else is like, and what discoveries they have made, from their friends and family’s posts on social media. You wouldn’t get all the detail you need!

It’s known that he taught a special “Pythagorean Way of Life,” based on religion and ritual. Interestingly though, his beliefs were shaped by mathematics.

After he died in roughly 490BC, many people glorified Pythagoras and considered him God-like.

Apparently, he performed miracles: he killed a dangerous snake by biting it, he was seen in two cities at the same time, a river spoke to him and his thigh was golden.

Who ACTUALLY Wrote the Pythagorean Theorem? 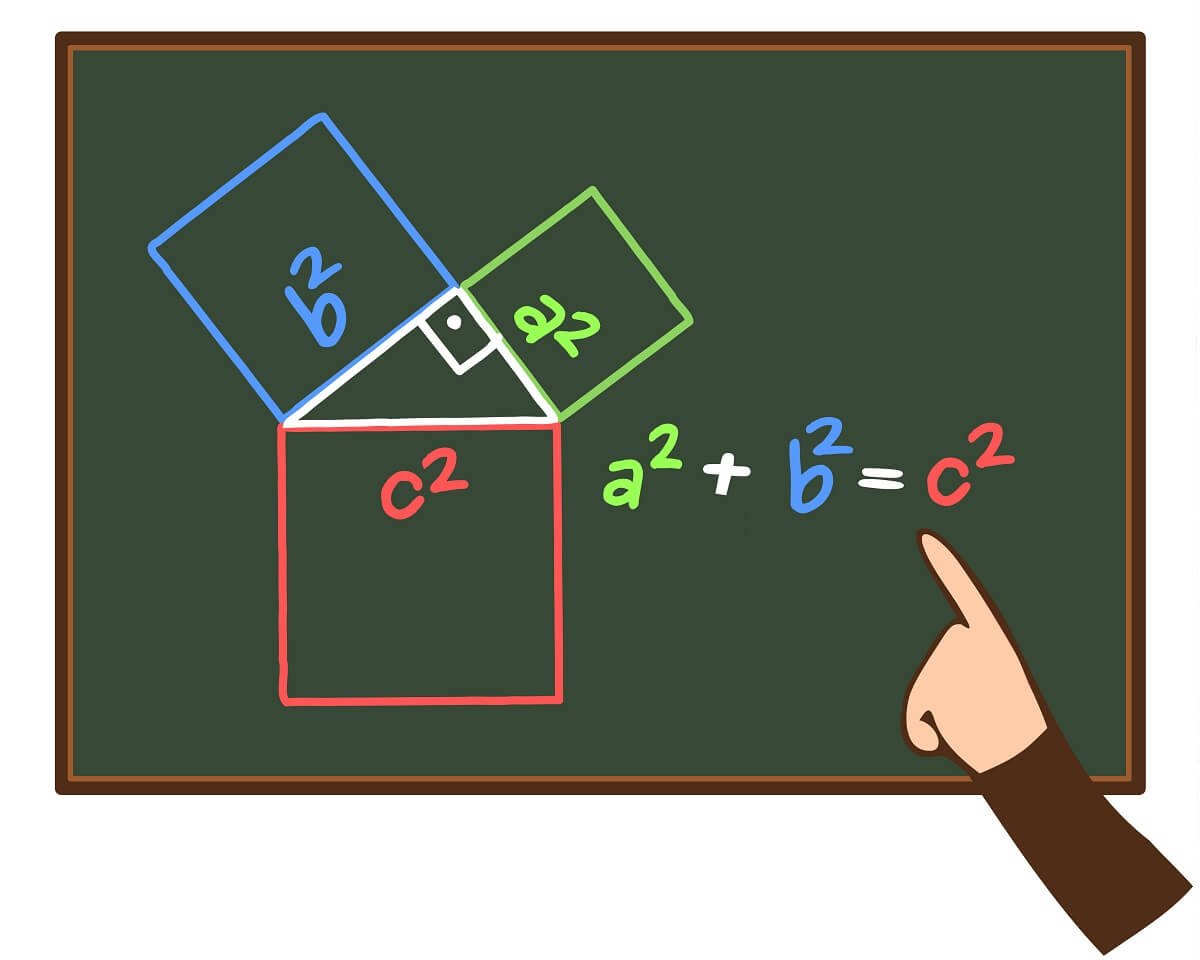 The Pythagorean Theorem is what Pythagoras is most famous for – it’s probably the first thing you think of when you hear his name.

But did Pythagoras himself really think of the theorem? Historians don’t know! It’s possible that one of his disciples wrote it after Pythagoras died, and named it after him.

The Pythagoreans were secretive. They came up with many proofs of important mathematical ideas but didn’t share their discoveries with anyone else.

If Pythagoras really did write the famous theorem, he didn’t tell the world about it!

What is the Pythagorean Theorem?

First, a right-angled triangle is a triangle that has an internal angle of 90°. It looks a bit like a ladder leaning between the floor and a wall.

Second, the hypotenuse of a right-angled triangle is its longest side. It is always the diagonal and never touches the right-angle. It would be the ladder in this picture!

“In a right-angled triangle, the square of the hypotenuse equals the sum of squares of the other two sides”.

Don’t let the word ‘theorem’ put you off! It boils down to one equation:

Where a and b are the smaller side lengths and c is the length of hypotenuse.

If you have two lengths of a right-angled triangle, you can find the third using the formula.

Other Theories and Discoveries Attributed to Pythagoras 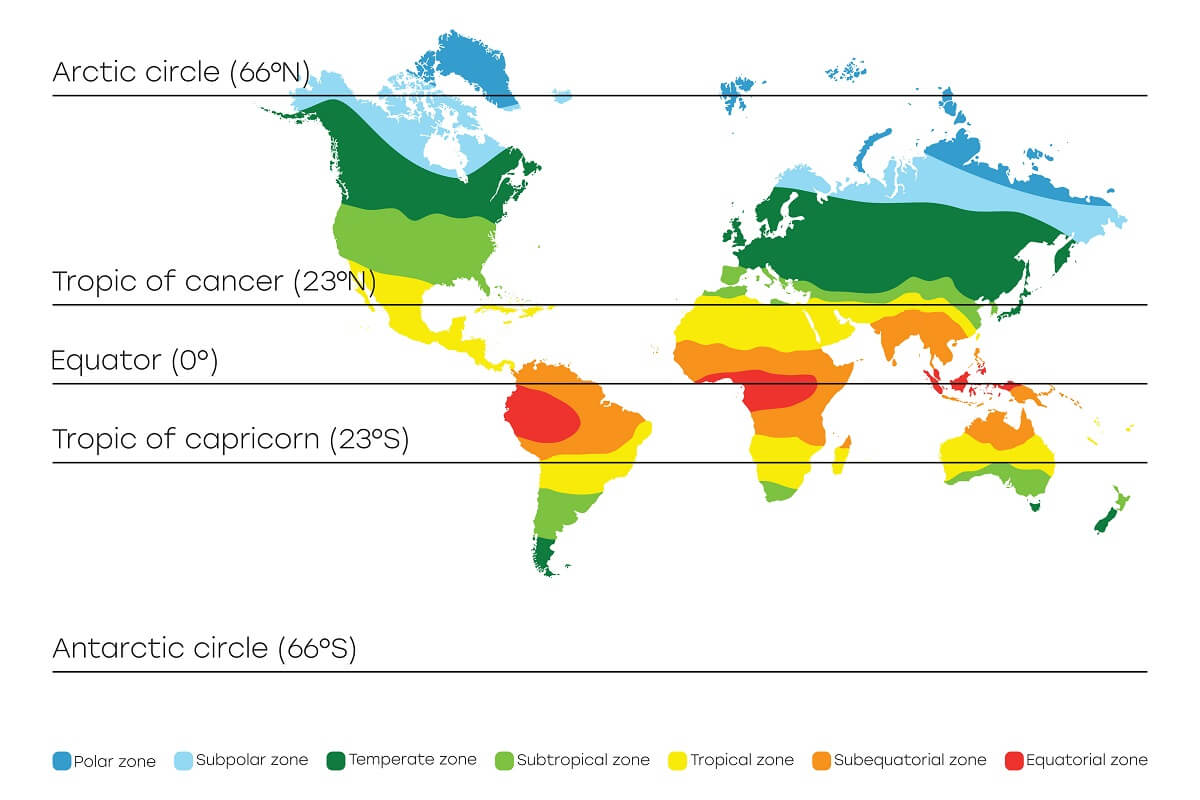 Even though Pythagoras is a mysterious man and not much is known about his life, he is given credit for all sorts of discoveries in math, music, astronomy, and philosophy.

He was a well-rounded guy!

In Ancient Greek society, Pythagoras was credited with being the first to teach that the Earth is a sphere.

He was also one of the first to divide the world into five climatic zones – two cold zones at the poles, a tropical zone across the equator, and milder zones between them.

Pythagoras believed that math and abstract thought are the basis of morality and science. His teachings in philosophy inspired famous philosophers Plato and Aristotle.

Pythagoras started the idea of a number system, founded on his belief that numbers make up everything in the world.

He believed that all numbers are rational – that they can be written as fractions – and that they were beautiful in their simplicity.

The Pythagoreans were shocked when they discovered \(\sqrt{2\ }\), an irrational number that cannot be written as a fraction.

Pythagoras linked math to music when he heard blacksmiths’ hammers hitting metal. He realized that the pitch of the sound made was related to the size of the hammer.

Certain pitches sound nice when played together – they are in consonance. Other pitches clash, making a nasty sound – they are in dissonance. 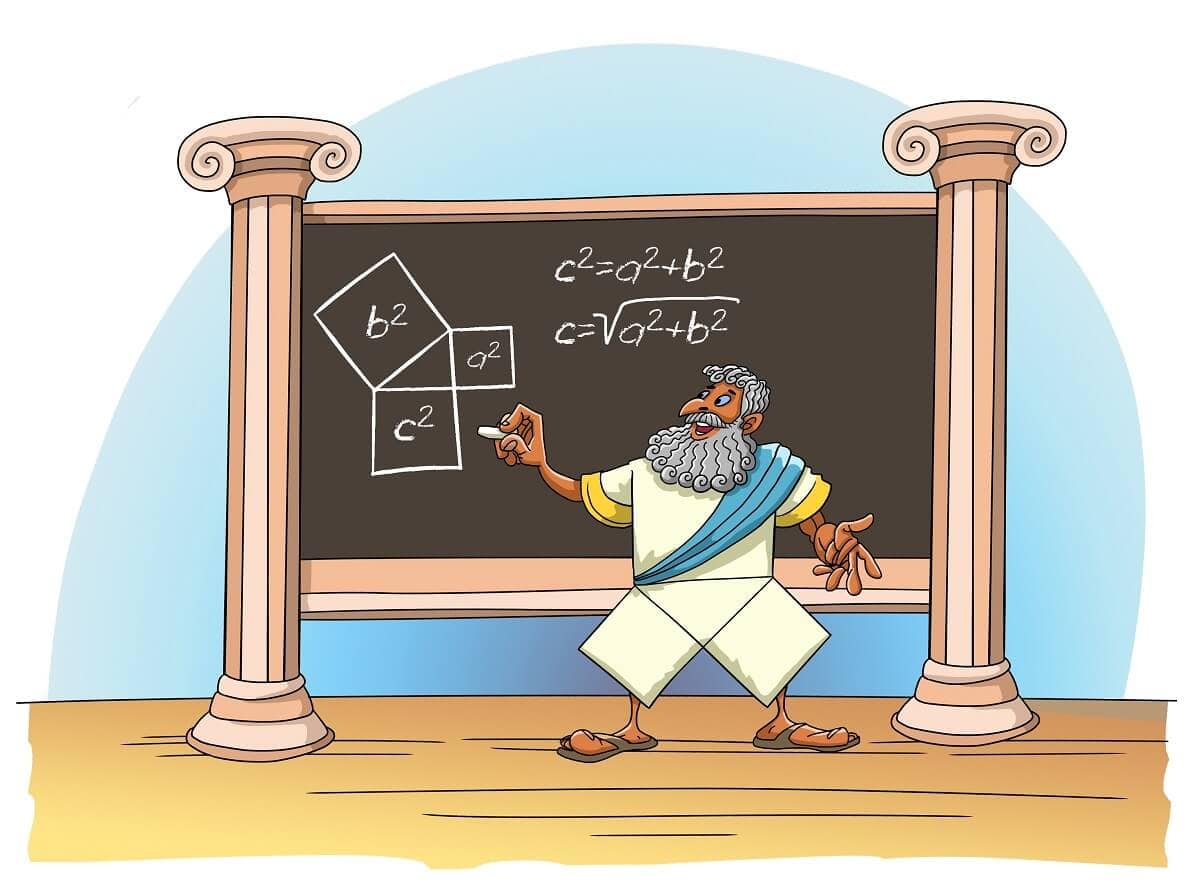 There are infinitely many solutions to the equation a2+b2=c2

This becomes clear if one of the values is fixed. Let’s suppose that a=2 and see how many pairs of b and c values make sense.

This equation gives the relationship between b and c. Any value of c>2 has a corresponding value of b which satisfies the Pythagorean theorem because the radical is positive.

If c<2, the equation has imaginary, or complex numbers.

which isn’t a real number, because no real number can multiply by itself to make a negative number!

We have just said that you can pick any value of c>2 and plug this into the equation \(b=\sqrt{c^2 – 4}\) to complete the solution.

Let’s give this a try:


If you stop to think about it, what would a right-angle triangle with two sides of the same length look like? Let’s use math to find out.

We’re going to let a=2 and c=2, and put them into the equation to see what happens.

Hmmm, a right-angle triangle with one side of zero length? The math has spoken – there is no such thing!

In short, that’s a lot of solutions! 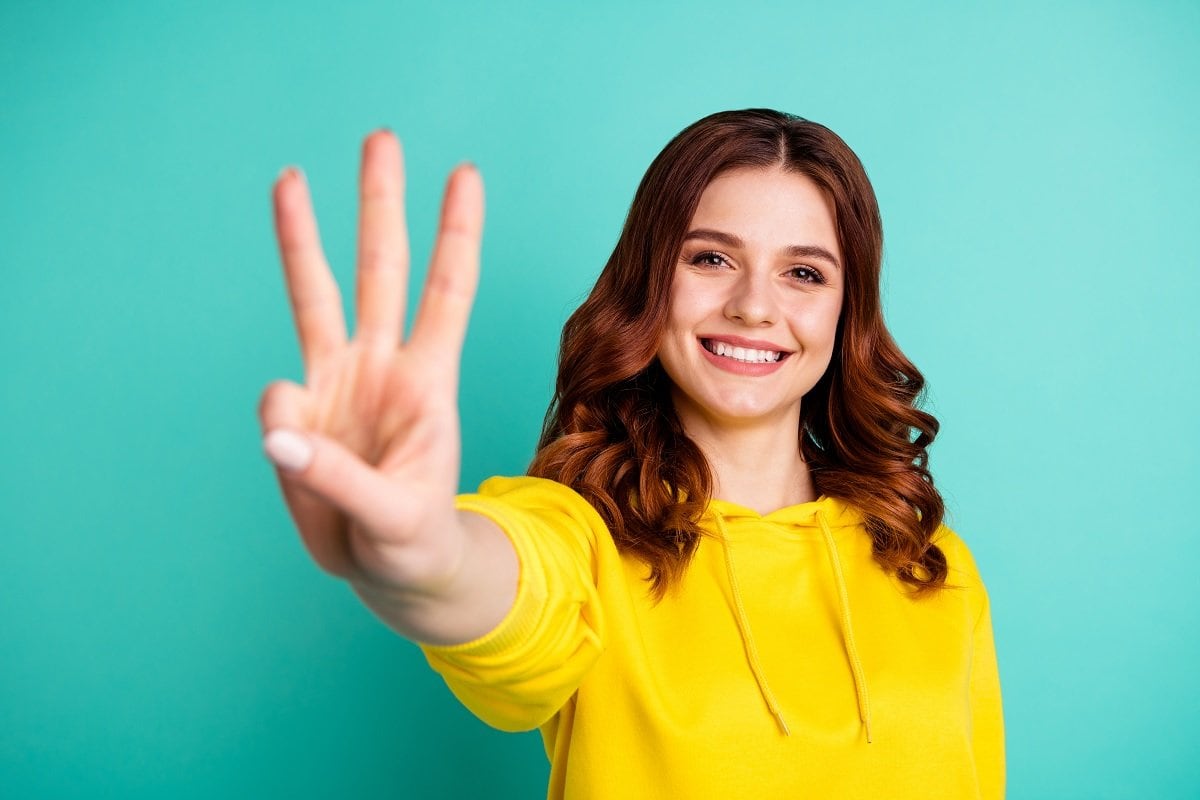 The possibilities are literally endless when it comes to solving this equation.

These are triplets of positive integers a, b and c which solve the equation a2+b2=c2.

Pythagorean triples are easier to work with because no radicals are involved. However, there is less freedom when creating them.

These triplets aren’t constructed by picking two variables and solving for the third – because of the special integer property, we must be more sophisticated!

The integer triplets \((a,b,c)\) fit into one of two categories: either all three numbers are even, or one is even and the other two are odd.

Adding to this property, some equations help us construct a valid Pythagorean triple.

Begin by picking two positive integers. Call the bigger number x, and the smaller number y. It’s important that x and y are not equal to each other.

Substituting x and y into the following equations will give your triple:

The Pythagorean triple is

In this case, two of the numbers are odd and one is even so it’s in the second category.

We can check that the triple satisfies the Pythagorean theorem by simply substituting in a, b, and c to find that: 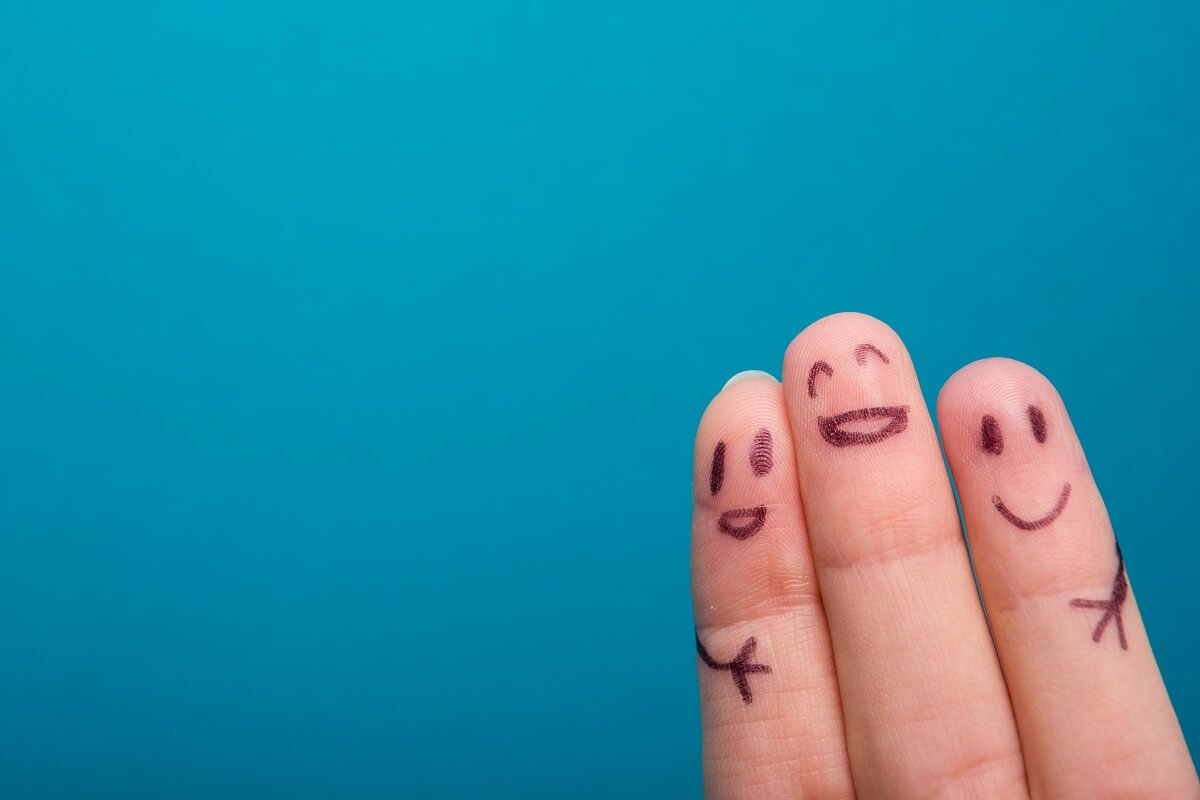 Equations can be manipulated by doing the same thing to both sides. Even though it has a fancy name, Pythagoras’ equation is no different!

If you multiply both sides of an equation by a positive integer, it’s still valid.

This idea is super useful – multiplying a triple by a positive integer will always give another triple!

Multiplying a triple is the same as multiplying both sides of the corresponding Pythagorean equation.

Think of it as scaling up the triangle, dragging it by the corner as you would with a photo or textbox on a computer.

Dividing triples is a dangerous game – if the divisor is not a factor of each number in the triple, the resulting numbers will not be integers so a Pythagorean triple will not be made. Disaster!

When multiplying triples, you’ve got a lot of options. Infinitely many, in fact!

This means that there is an infinite family of triples, related to one another by multiplication.

In each ‘family’ of related triples, the smallest is given a special name.

A Pythagorean triple is called primitive if the greatest common divisor of a, b and c is 1.

Primitive triples are the simplest elements in their families – they cannot be divided to produce a smaller triple.

This triple is not primitive because of the greatest common divisor, or GCD, which is 25, not 1.

Dividing each number by 25 gives another Pythagorean triple:

The division within the exponent looks a little suspicious, but we aren’t breaking any rules.

It is the same as dividing both sides by 252, which is allowed!

I hope you’ve enjoyed learning some history along with your math. Pythagoras is a legendary figure, shrouded in mystery, but his theorem doesn’t have to be.

After using a Pythagorean theorem worksheet, you should have the confidence to identify right-angled triangles, find missing side lengths, identify Pythagorean triples, solve real-life problems, and use the theorem in trickier shapes.

Each worksheet uses the same amazing little equation a2+b2=c2, discovered around 2500 years ago.

Pythagoras is most famous for this theorem, but he had a busy life! One of his achievements was creating a circle of scholars called The Brotherhood of Pythagoreans.

They were influential in Ancient Greek society – Pythagoras’s work in philosophy inspired Plato and Aristotle, and the Brotherhood made many discoveries.

To count the number of solutions to his equation would take a long time – an infinite time, in fact! There is also an infinite number of integer solutions, called Pythagorean triples.

These triples are related to each other by multiplication. The first triple in each related ‘family’ is called primitive.

Once you’ve mastered using the theorem, you might enjoy learning about other mathematicians! The story of Fermat’s last is particularly interesting and begins with a similar equation…

If you have a question or comment to leave below, don’t be shy! It’s helpful to learn from each other.