What are all the factors of 27? Is there an easy method to find them all? And how many are there?

This lesson will explain everything you need to know, but before we carry on, it is important to understand exactly what a factor is.

You have probably been finding factors since you were little without even thinking about it!

When you wanted to share out sweets at the end of class, and you made sure everyone got an even amount, both the people and how many sweets each one got are factors of the total of sweets.

If you have 40 sweets, and 20 classmates, each person will get 2 sweets each.

Factors are as simple as that! A number that goes into another number perfectly, without leaving any leftover.

There are only two proper factors: 3 and 9.

This is because the number 27 itself and 1 are not considered ‘proper’.

What are the Factor Pairs of 27?

A factor pair is any pair of numbers that can be multiplied together to make the number you’re finding.

A whole number can also be called an integer. Since integers can be negative, factor pairs can include negative numbers too.

Multiplication is commutative, so swapping the order in a pair is going to give us the same result. There is no need to include them as a separate pair.

Sometimes the word divisor is used instead of factor.

This is because the factors of a number are the only integers that ‘divide’ it perfectly, without leaving a remainder or a fraction.


When we divide 27 by any of its factors, the result is always a whole number:

Using any other number will give a fraction, or a remainder, such as:

A prime number is a number whose only factors are 1 and itself, not including 1. Here are the first few:

It’s actually impossible to list all of the prime numbers, since there are infinitely many! But here are the first 50,000!!!

They’re also quite random – there is no formula for working out what the next prime number is in the sequence, and it’s quite difficult to check whether numbers are prime or not.

Comparing the list of prime numbers to the list above, you can see that 27 only has one prime factor: 3.

How to Find the Factors of 27

Factorizing is the process of finding all the factors of a number.

There’s no easy formula that can instantly tell us all the factors of a number, but there are some easy ways to check whether a particular number is or not.

Remember that the factors of a number are the only numbers that divide the number being factorized exactly, i.e., without leaving a remainder. You’ll use this fact to find them all.

When you divide a number by one factor, the result is itself another factor.

This means that each time you find one factor by this method, you actually find a pair!

You should start with one and work your way up to the largest integer that’s smaller than the square root of the number being factorized.

That’s because the smaller of the two numbers in a factor pair must be smaller than the square root of their product.

If the two numbers in a factor pair are equal, that is the square root!

For 27 you only need to check up to 5 because, by that time, you’ve found every pair with the result.

If you are trying to find the factors of larger numbers and you can’t use a calculator, it is really useful to know the divisibility rules.

These are so useful in fact, that we made a printable table and worksheet for the divisibility rules from 2 to 15, for you to keep with you. Just click or tap the images below to get them for yourself! 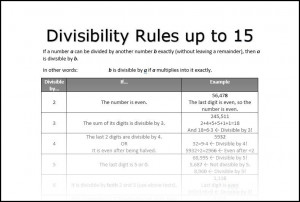 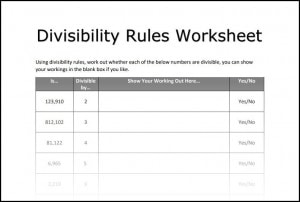 All numbers can be broken down, or decomposed, into a product of their prime factors, in a unique way.

This is called the number’s prime factorization, or prime decomposition.

The prime factorization of 27 can be found using a factor tree: 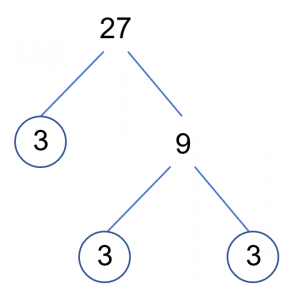 Start by splitting up 27 into any factor pair. If a number is prime, circle it – that branch ends there and doesn’t go any further.

For all remaining branches that aren’t prime, repeat the process, splitting and identifying any primes, until all the branches end with primes.

The circled primes are your prime factorization:

If you hadn’t spotted it yet, it should now be clear now that 27 is a cube number.

You’ll see more about this, and other interesting facts about 27 in the section below.

As long as you don’t start with 1, it doesn’t matter which factor pair you start with, you will always reach the same prime factorization.

Make sure you understand how the factor tree method works. If you’re not 100% sure, have a go at using it to find factorizations of the following numbers:

If you still have questions to ask, we’re happy to help in the comments at the end.

Where might you find the number 27 elsewhere in life?

What examples of 27 appearing in the real world can you find?

There are also a few mathematically interesting facts about 27:

We found the factors of 27 by seeing which integers divided it exactly. After checking all the integers lower than the square root of 27, we were left with the following list of factors:

We also found the prime factorization of 27 using the method of factor trees, which turned out to be:

If you’re not sure about any of the methods that we used to find these, give it a go yourself with some numbers of your choosing.

Was there anything you weren’t 100% confident with? Let us know below or share your own interesting facts about the number 27 – mathematical or otherwise!