After that, there are test style practice questions for you!

If you’re comfortable with what rational numbers and roots are, then you can skip ahead to the theorem itself.

Keep this table of factors and multiples handy while you’re working through the examples and practice questions!

What is a Rational Number? 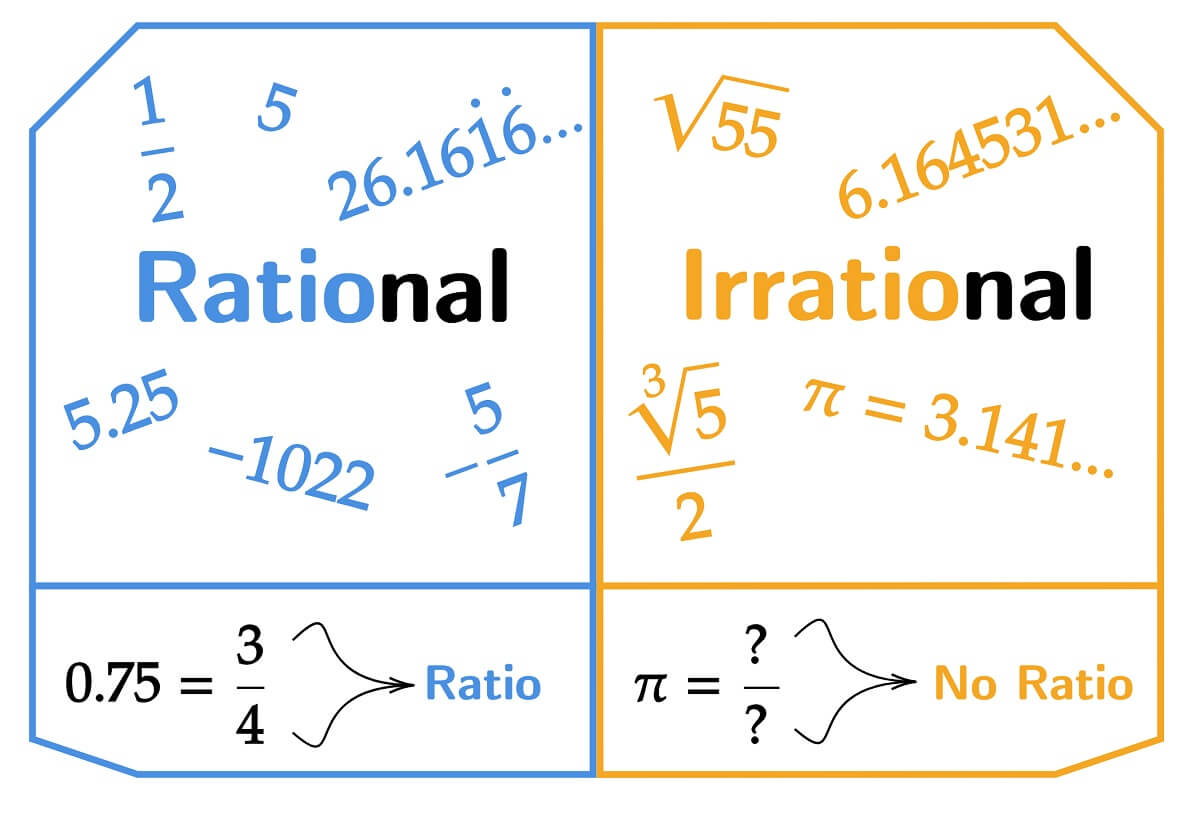 A ratio is a fractional relationship between two quantities!

A ratio-nal number is a quantity that can be written as a fraction.

What is a Root?

A root is a value for x that makes the function equal to zero. It is also called a solution.

This function f(x) is a polynomial of order 3. The highest power of x is 3. 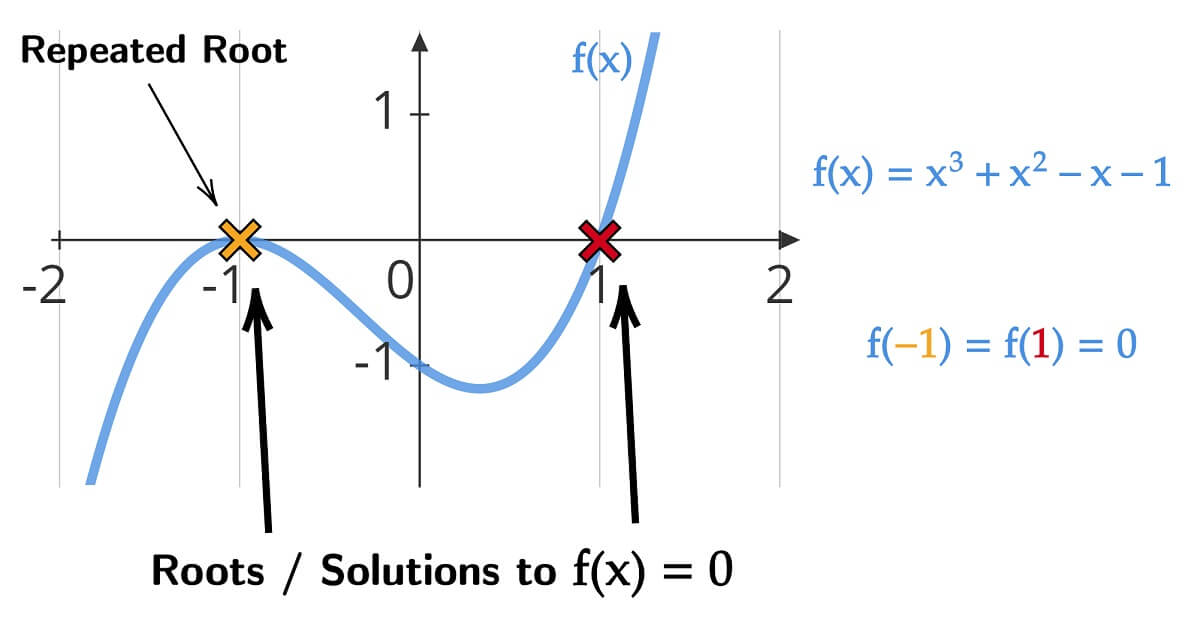 The graph of the function crosses the x-axis at points x=-1 and x=1. These are the x-intercepts because at these points on the function, y=0.

In the case above, the root x=-1 is repeated because it is also a local maximum.

For the theorem to work, the coefficients an, an-1, an-2, etc., must be integers – whole numbers.

You’ll see how it works in the next section.

Only use the rational root theorem when the coefficients are small, and as a last resort or when you’re told to. It is less efficient than some other steps you could take first.

First, try factoring as much as possible, it may turn out you don’t need to use this method if you can simplify a polynomial of a higher order, like x3 or x4, by reducing it to a combination of lower-order equation(s), for example:

In that case, there is no need to use a theorem to solve the equation – factoring did it for you!

How to Use the Rational Root Theorem

First, identify the coefficients you will need to use. 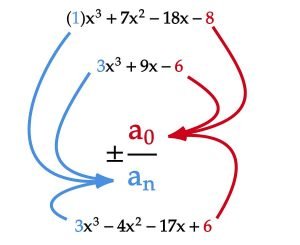 Let’s say that you’ve been asked to list all the possible rational roots for the last equation in the diagram above:

Use the rational root theorem.

Put each number into the function as x to test if it’s a root, like this. 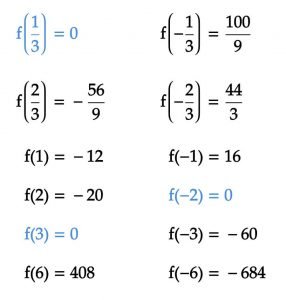 A polynomial always has the same number of roots as its order.

So a polynomial of order 5 has 5 roots. That doesn’t mean they are all rational though.

A polynomial can have no rational, or real, roots. This just means that it’s roots are complex, and involve some irrational operator, like a radical, e, π, etc.

If the theorem finds no zeros, the polynomial has no rational roots.

a) List the possible rational roots for the function

b) Test each possible rational root in the function to confirm which are solutions to f(x)=0.

c) Use the confirmed rational roots to factorize the polynomial.

b) For each possible rational root, replace x with the value and evaluate the function. 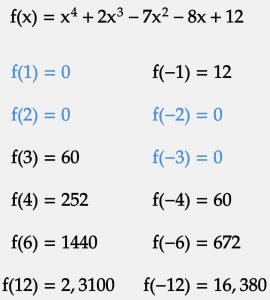 c) The confirmed roots are the ones that made the function equal to zero. 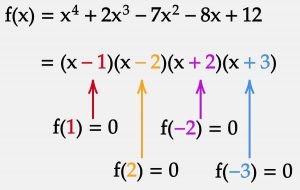 In this last example, did you notice that when we found roots, like negative 3, the 3 is positive when writing out the factorization? The sign changed. Why is that?

It’s because each bracket in the factorization must equal zero when x is that root. A root of -3 will make zero when 3 is added to it.

The whole function multiplied by 0 is 0!

a) List the possible rational roots for the function

Here are the factors of 42 for your reference.

b) Test each possible rational root in the function to confirm which are solutions to f(x)=0.

c) Use the confirmed rational roots to factorize the polynomial.

b) For each possible rational root, replace x with the value and evaluate the function.

c) The confirmed roots are the ones that made the function equal to zero. 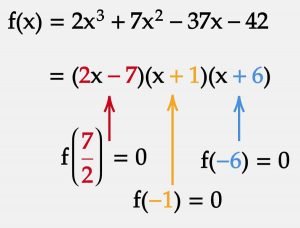 In advanced mathematics, there will be times when you must find the solutions or roots of a polynomial for a practical, or theoretical purpose.

You may want to find the point of greatest flow while on the design team for a rollercoaster at a theme park, which can be modeled using a polynomial equation, or perhaps you’ll need to theoretically test the aerodynamics of a curved edge before building an expensive prototype.

What is the Integral Root Theorem?

Use the rational root theorem to factorize the following polynomial function:

Only factorize as much as you can using the theorem.


First, use the theorem to find the possible rational roots.

Then plug those values into f(x) as x to see if they are roots. 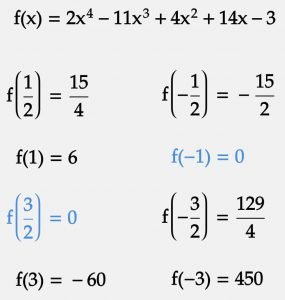 Finally, use the known roots to factorize as much as you can. 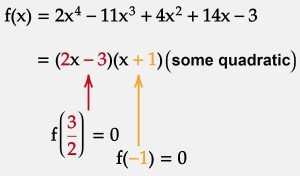 The focus of this lesson is using the theorem, but for those of you that took it to the next level and used polynomial long or synthetic division, the quadratic is (x2-5x+1).

How did you get on with the questions? Were there any parts you weren’t confident with? Any questions you have can be asked in the comments at the end of the lesson.

Rational numbers can be written as a fraction of whole numbers, or as a decimal number that either has an end, like 0.65, or a repeating pattern like 0.16161616…

The roots of a polynomial f(x) are values of x that solve the equation f(x)=0.

As the name suggests, a rational root is the combination of a rational number with a root.