In this lesson, you will learn all about multiplying radicals and their different types.

Don’t worry if you don’t know what a radical is, you have probably seen them before! They are numbers containing the √ symbol, which is called the radical or root symbol.

Radicals are a tidy way to write numbers that have decimal expansions that go on endlessly, so you must be able to use them confidently.

Multiplying radicals is often better seen as simplifying a radical expression, which is rewriting it as simply as possible!

But first, let’s get comfortable with using the correct words.

Parts of a Radical and Square Roots
Multiplying Radicals
Method 1: Using Radical Notation
Method 2: Using Fractional Exponents
Which Method to Use
How to Simplify Radical Expressions
Recap
Why Use a Radical?
Square Roots
Cube Roots and More
To Sum Up (Pun Intended)

Parts of a Radical and Square Roots

A square root is a type of radical that you’re probably familiar with!

The exponent for a square root is left out – if you ever see a radical symbol without a number for its root, then it is a square root.

If you are not sure about how radicals work or want to brush up on it before tackling the multiplication, skip to the Recap section and come back here when you’re done.

If you prefer reading to watching videos, or want to do both, then here we go!

Now that you know what the different types and parts of radical expressions are and how to simplify them, you are ready to start multiplying them together!

There are two useful methods for multiplying radicals:

There are a few simple rules that help when multiplying one radical expression with another. We’ll go through them one at a time.

Rule 1: The radicands multiply together and stay inside the radical symbol.

But 16 is a nice, square number, so this can be simplified.

Again, 16 is a square number, so this can also be simplified.

Rule 3: You must apply the radical to a number to take it outside the radicand.

See how that works for a square root? The a2 could be removed because its power was 2, the inverse of the root, but the power of b3 doesn’t match the root so it stays inside.

The same applies to cubes or any other order, for that matter.

In this case, a2 stays inside because it is not a cube number, while b3 was, so it can be brought out.

This is as simple as this radical expression gets.

First off, what on earth is a fractional exponent?!

Fractional means a fraction shows it with a numerator on the top (multiplier) and a denominator on the bottom (divisor).

Exponent is another word for power, or index.

Put them together, and you have a fractional exponent – a handy way of showing a radical expression because it allows you to see the powers or roots as simple fractions.

The rule to know when using this method is one of the exponent product rules. 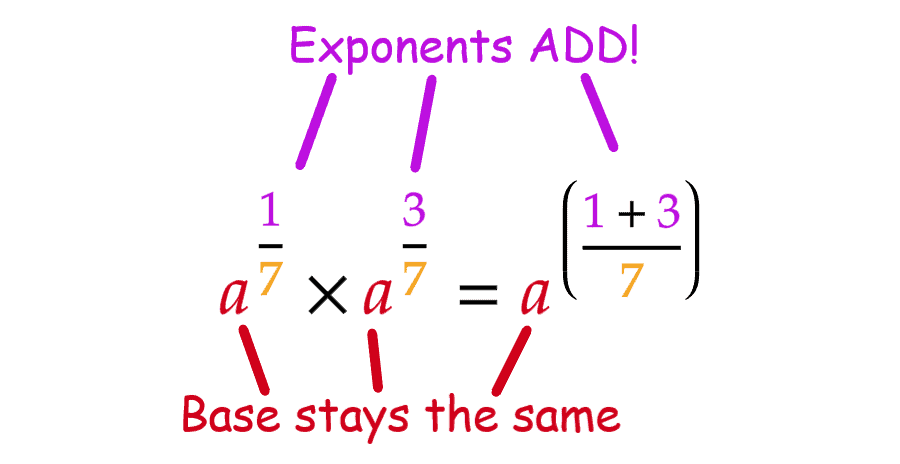 With this power-ful rule, you now have the keys to multiplying radicals of all sorts!

Here is a worked example. 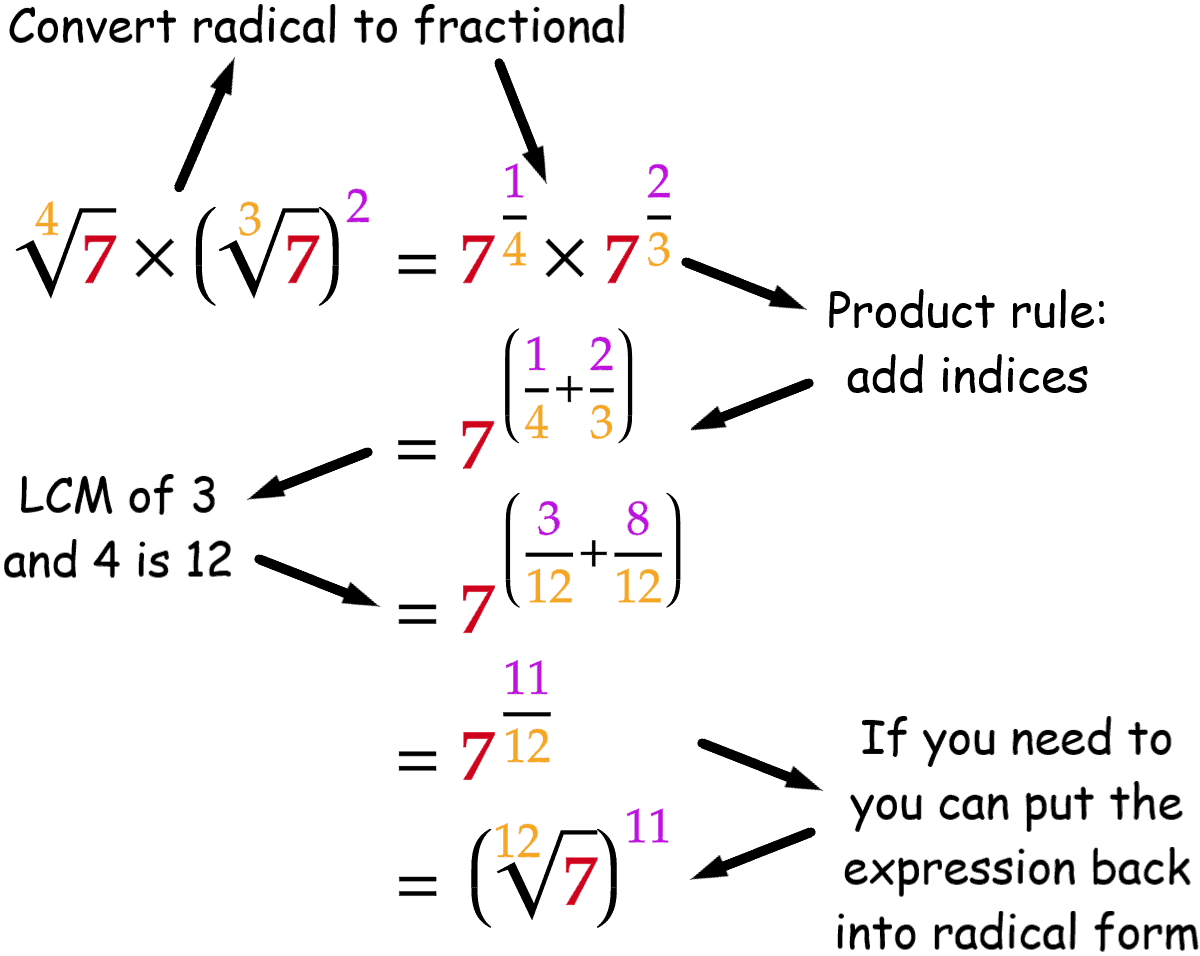 Which Method to Use When Multiplying Radicals?

Both methods will work either way once you understand what they do, but which one is easiest to use?

The answer is, whichever one you prefer.

However!! This quick check will give you the least work to do:

That’s all there is to it, now…

How to Simplify Radical Expressions

Simplifying a radical is a must-do step for presenting your final answer. To not do this would be like showing 2/4 instead of 1/2.

It’s the reverse of the radical multiplication rule. Let’s try it out together.

75 is not a square number, so what can you do to simplify it?

So, if we use the first rule of multiplying radicals in reverse:

Let’s do one more together before you do it yourself, this time with cube roots.

First, we must look for a cube number that divides 250.

So, again using the first rule of multiplying radicals:

To spot square factors that can help simplify radicals, use our list of factors for all numbers up to 100.

Why Use a Radical?

The answer is: look at the square root of any number other than a square number, like 7.

Numbers like \(\sqrt{7}\) are known as surds if they use the radical notation, or irrational numbers otherwise. The root or radical symbol helps us write them easily, so that equations aren’t full of decimal numbers.

If a is a positive number, a square root of a is a number that gives a when squared, or multiplied by itself. Just like this:

Because 5 multiplied by itself is 25.

What happens if you square a square root?

And when squaring this, it’s the same as multiplying the exponent by 2:

So, the square root does the opposite of squaring a number.

Impress your teacher by telling them that a square root is the inverse of a square function. Just make sure you can explain what that means!

A cube root asks, “What number would multiply with itself 3 times to make the radicand?”

As you can see, the answer for the cube root of 8 is 2, because

It asks, “What number would multiply with itself 4 times to make the radicand?”

Now go learn what you came here for in the first place. Head back to the “how-to” section on Multiplying Radicals

To Sum Up (Pun Intended)

The radicand is the number inside the radical symbol.

Radicals with root x ask the question: “What would multiply itself x number of times to make the radicand.”

To simplify a radical expression, look for a number that divides the radicand. Use our table of factors and multiples to help with this.

If any of this didn’t make sense to you, if you’re stuck, or you just plain enjoyed the lesson then please comment below and we can help out!

1 thought on “Multiplying Radicals – The Complete Lesson with Recap”