In this lesson, you will learn what are consecutive integers, and how to solve the kind of problems you are likely to come up against in tests, including:

There are also some examples to work through so you can get used to the method.

What are Consecutive Integers?

When you’re not sure what a math term means, break it down by looking at each word, then put them together again.

Following one after the other, in order without a gap or interruption. 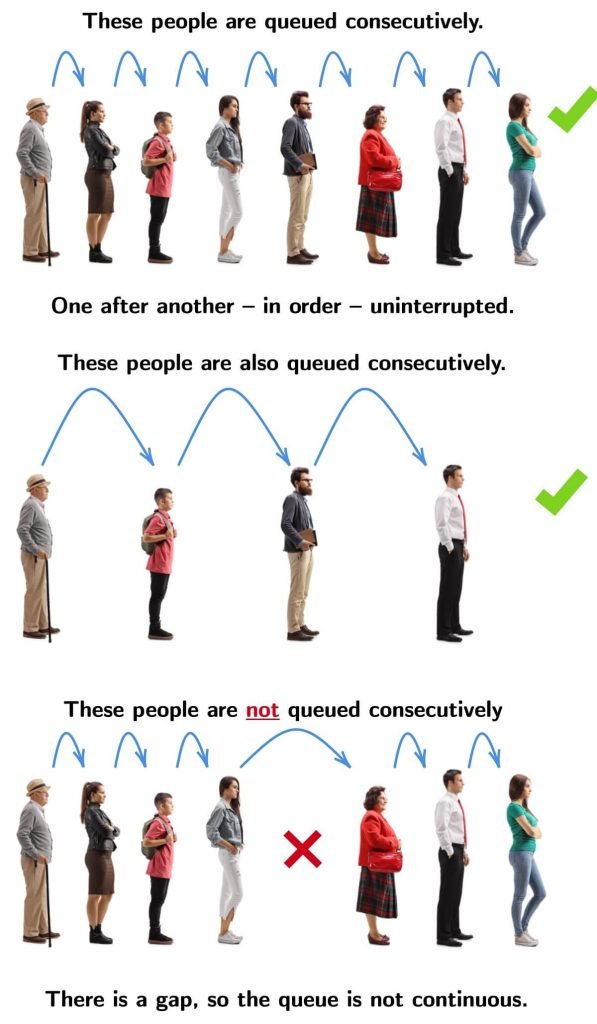 Any number that is written as a fraction or has decimal figures is not an integer, like 1.25 or 5⁄3 .

So, put both ‘consecutive’ and ‘integer’ together again, and you have:

Whole numbers that follow one after the other, in order, with no gaps or interruptions.

However, consecutive integers can start with any whole number, not just 1. An example is the pair of numbers, 42 and 43.

There are also consecutive odd or even integers, which start with either an odd or even whole number and go up or down in 2’s. 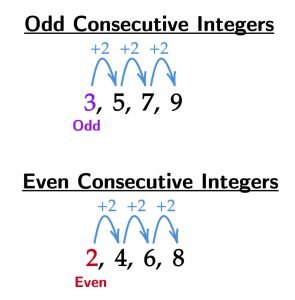 But what if you had this sequence?

Sure, you could add them up one by one, but using a little algebra will make it simpler. It will also help with finding the consecutive integers that add up to a certain number in the next two sections.

Replace the first number in the sequence with a letter or symbol, like x.

Then every term in the sequence becomes x + something.

When your mental arithmetic improves, this becomes quicker and easier.

Another option is to look for a pattern, just like in many areas of math – what you’re looking for is a pattern you can use to your advantage.

This process only works with an odd number of terms, so that there is a middle value.

See how the middle number is the one that gets labeled x?

So x=76 and the sum of that sequence is:

So you found the same sum for the sequence with two different methods.

Sometimes a sequence is centered on a nice number to work with, and sometimes it’s not. With some practice, you will be able to see quickly which approach is best.

Now, you’re going to do it backward!

The Sum of Two Consecutive Integers

This is where it gets fun.

A common test question is finding which two consecutive integers sum up to a certain number.

Alex has 9 kids to babysit – too many for him alone, so he called Maria to help out.

There’s an odd number of kids, so Alex decides it’s only fair that he looks after one more child than Maria.

How many kids will Maria babysit?

This is pretty simple because you’re working with a small number, 9 kids, but it lays the groundwork for working with bigger numbers.

Then it’s a simple case of rearranging the equation to get x on its own.


Alternatively, you could use a diagram.

Then just add the lonely child to Alex’s kids.

If you stop to think about it, the methods used in the first and second solutions are actually the same, one uses math and the other a diagram.

Unfortunately, the second approach doesn’t help with bigger numbers, and won’t get many points in a test. Imagine drawing 156 bottles of water!

Talking of 156 bottles of water, let’s share them between Kirsty A. and Kirsty B. This time, Kirsty A. gets 2 more bottles than Kirsty B.

It’s the same as the last problem, except now the gap between the numbers is 2 instead of 1.

There will be no foolish wand-waving here. I mean, no diagram drawing… So Kirsty A. gets x+2 bottles, and Kirsty B. gets only x bottles.

Write it out as an equation.

Then simplify and rearrange the equation to find the value of x.

It doesn’t matter which group you assign the letter to – Kirsty B. could have been x and Kirsty A. would then be x-2, you’d still find the correct solution.

The Sum of Three Consecutive Integers

The next problem is yours to solve.

Let’s say you hold a mental arithmetic contest. 11 people enter the contest, each has to give 3 sweets to enter.

You have to share the sweets between the top three contestants:

How many sweets does 3rd place get?

How would you go about solving that problem? Try it yourself, then open the blue box below to see the worked solution.


So you probably figured out straight away you’re looking for three consecutive integers.

Next, model the problem as an equation.

Seeing as you want to find how many sweets 3rd place gets, let’s make 3rd place’s number x. 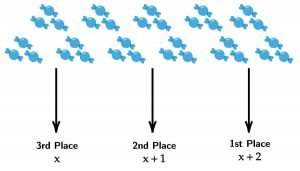 Let’s bring it in.

Consecutive integers are whole numbers that are next to each other. It could be two numbers, like 34 and 35, or it could be a series of numbers, such as:

Write out the equation that equates the sum of the consecutive numbers to the original number you were given.

Simplify it and rearrange it to make x the subject.

Did you struggle with anything? Please ask any questions in the comments and someone will get back to you.